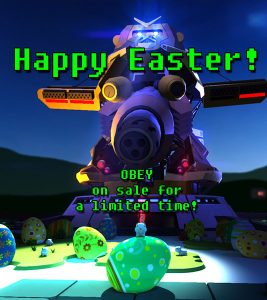 OBEY is on sale for under $10 through April 7th at 10:00am Pacific — for those enjoying an extended holiday weekend, or in the middle of Spring Break, it’s a great time to jump (back) in and run a few rounds with friends in a multiplayer experience unlike any other out there!

We have a new video by jacksepticeye that I wanted to share with you all! It’s well worth the watch.

Something has been missing in OBEY: a viable way to win as a snitch!
Enter the watchtower! Watchtowers are a way that robo can reliably pay a snitch to stay put and watch for attackers. It simply drops the given autopay every 37 seconds. So now there is a way for a snitch to earn a reliable income, and possibly win if he plays his hand right.

NOTE to newer players:
Sometimes new players get frustrated when a a different player plays as a snitch, making it seemingly impossible to subvert. There are ways to counter a snitch:

Other significant changes include: