OBEY is a highly asymmetrical multiplayer game where winning means bribing and coercing opponents into helping you win.

We’ve all played games where you command groups of AI characters, or team mates.  OBEY instead puts you in the position to command your enemies (human opponents), and to be commanded by them.  Players are always free to obey/disobey.  It is up to them to deal with the consequences of their actions in the game.

If you are being coerced you have only stealth, and creative trickery to escape.

To win, make more money than any one else by the end of the round.To make the most money, take command of the giant robot (the robot player makes 10x more than the other players per second)The player in the robot can easily destroy any player he sees trying to approach (IF he sees them).That’s the basics – so superficially, it plays like ‘king of the hill’.However, the best OBEY players are those who learn that it is not always in their interest to simply kill the approaching players but instead coerce opponents to do their bidding… and that’s where the game gets interesting!

If you would like to see to see some in-game footage, have a look at this page on the wiki.

Alternatively, have a read of this blog post about gameplay, or have a listen to this audio to learn details about the game rules.  In addition, the OBEY wiki contains almost comprehensive information about OBEY.

Want to get updates about OBEY? Join the exclusive email list for FREE by submitting your email address HERE. I promise not to spam your email.

OBEY is developed by  a single developer. ME!  (Dez)

I have been a game developer since 2002. I’ve worked on a bunch of games and apps. 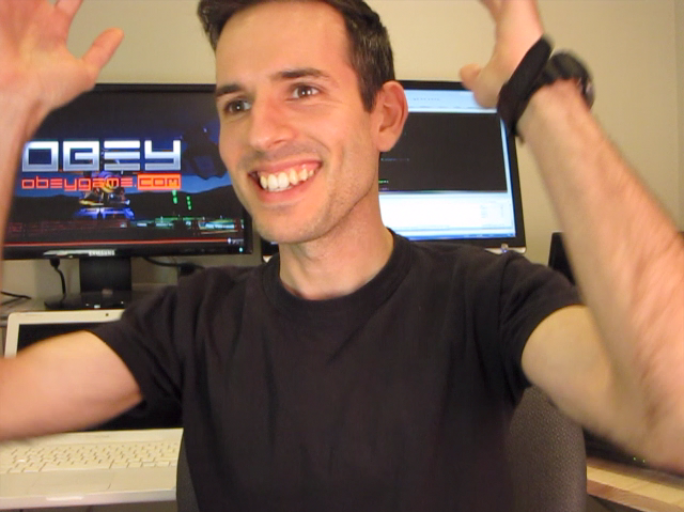 This is me each time i find a bug.